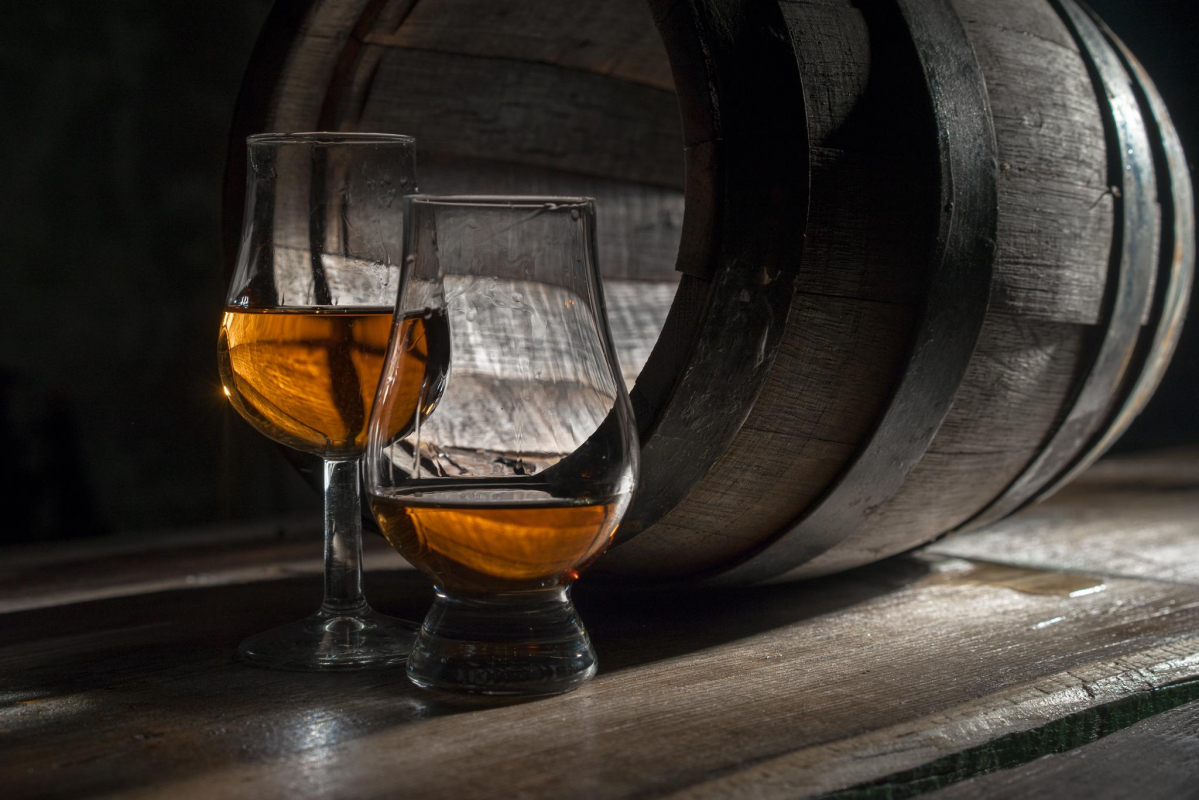 The alcohol reduction in a distillate is a very important procedure to obtain an optimal volume of alcohol. The final product can be customized according to the specific choices of the master distiller.

The process has a variable duration: from twenty minutes to the many years needed by high-quality distillates.

Defining details and timing is the best way to avoid problems that could alter the final distillate composition.

Problems in the alcohol reduction

Let's see what happens at a chemical and organoleptic level and how each of these problems can be avoided or solved.

If a distillate with a high concentration of fatty acids gets a too quick alcohol reduction, this creates the conditions for the saponification reaction.

Saponification is the formation of salts of fatty acids inside the suspension, which makes the product organoleptically unpleasant, with a soapy taste and a turbid look.

The too rapid addition of water, which contains alkali in an aqueous solution, determines the conversion of fats (esters) into soap. In distillates such as brandy, gin, and rum - products that tend to have a high ester content - adding water incorrectly increases the probability of saponification.

Here is what happens: the hydroxide anion of the salt in the solution reacts with the carbonyl group of the ester, where the expulsion of the alkoxide generates a carboxylic acid, and then an alcohol molecule. The alkoxide is a stronger base than the conjugate base of the carboxylic acid, so proton transfer is favored.

Flocculation may happen if unfiltered whisk(e)y is cooled: the low-temperature bottle presents floccules inside that seem to be weakly attached, moving with the liquid as you shake the bottle. As soon as the bottle is heated, these floccules disappear.

Flocculation occurs because, in high-alcoholic drinks, some elements like oils, fats, proteins, and oligosaccharides tend to remain in solution and they make the distillate bright, fresh, and clear. When you start adding water to reduce the degree, these components will unmix and go into suspension, giving rise to flocculation.

In some products, the louche effect is intentional, for example, absinthe, ouzo, pastis, or other anise-flavored liqueurs (all products which contain substantial quantities of anethole, the substance which gives black licorice its taste). As anethole is highly soluble in ethanol but not very soluble in water, when we add water to these distillates, the "ouzo" effect occurs. The addition of water then extracts the oils from the suspension and creates the desired milky-white opaque effect.

Louching is due to the oils and other water-insoluble compounds: they form during fermentation and distillation, and then come out of the solution and go into suspension at lower alcoholic strengths. However, the louche effect can also occur when not desired, typically in distillates from corn mash, macerated and distilled gin, brandies, and liqueurs. The distillate may also not become completely opaque, but only acquire a slightly bluish tinge due to the optical effect of light in the liquid.

In oily and fat distillates, opacification can be an undesirable consequence of alcohol reduction and should be solved.

There is no solution for saponification. So, it is crucial to avoid the problem during the product development phase.

The way is to study the best procedure upstream by conducting dilution tests and finding the optimal timing for every product and every distillery; you can try to reduce the degree at different speeds and for every combination of smells. Then taste, and analyze.

Flocculation is mainly a cosmetic problem and does not alter the product's organoleptic properties,  especially if the product is an aged distillate. You can remove it by cold filtration.

Reduce the temperature, allowing precipitation of the flocculation, and then remove it through filters. However, cold filtration also removes many desired flavors in the final product.

For opacification (louching), the solutions are more complex. For example, you can make tighter cuts; the more you push the core extraction into the tail region, the more likely it is that fusel oils will enter the final product.

Or, you can use a slower grade reduction procedure, as you give the water and ethanol a longer time to mix and establish bonds. Finally, you can filter the opaque distillate, thus avoiding redistilling the product.

If you are making a Genever-inspired gin, the base distillate is not extra-neutral alcohol but a grain distillate instead. If the process includes steeping and steam distillation on an alcohol base with a significant concentration of fusel oil, the chances of louching are very high.

If you want to avoid this undesirable effect, the high-proof distillate needs to rest for at least a week before starting the grade reduction tests. To decrease the probability of louching it is best to use only a part of the distillate: start reducing the grade by taking the time needed (about one week).

Finally, go through a 10 μm sock filter to capture the larger molecules. Once you reach the bottling grade, just place a test bottle in the refrigerator for 24 hours. If there is no opacification, it is possible to bottle the rest of the batch.

If not, it is appropriate to lengthen the time.

Please consider these timings as a broad indication: each product and distillery deserves specific attention and a proper testing phase to lower the probability of mistakes and obtain the desired result from the final product.